Consciousness is all pervading!

If we are ever to understand and transcend our human condition, to free ourselves from this continuous cycle of birth, death and rebirth, we will need to understand the stream of consciousness that flows in us all.  We grasp it blindly and become entangled with it, trying all the while to become content and happy without seeing the inherent impossibility of ever making this world perfect. The suffering and inevitable lack of peace that our conditioning brings is built in. The Buddha pointed to this unsatisfactory nature of our being in his “First Noble Truth” and labelled it “Dukka”. If ever we are to realise the peace of the enlightenment he discovered, we will need to understand our consciousness and the primary role it plays in mediating the present moment. Some may think atheistically or nihilistically that death will bring an end to it all. Others may believe in a theistic God controlling everything, but any cursory study of the mind using stillness as a datum, sees that its conscious flow will reveal the conditioning that brings about the next life, or the next moment or the next day or the next Universe. All these scales are there to see right in heart and balance of the present moment. Unless we release ourselves we will continue to remain trapped inside our conditioning and vulnerable to the Karma we have made.

Knowing the present moment is the key to this understanding, and the truth of its reality can be seen when we practice the eight fold path of the Buddha. This practice sustains us at a certain level of morality so our minds can be relatively free of guilt and remorse in order to pursue stillness. It gives us a way to develop concentration and mindfulness so we can mature with the right stillness to observe and know what is happening --- only then can the right wisdom naturally arise. Today we also have the benefits of Physics and its deepening insights into the physical Universe. Newton’s laws are good for day to day use.  Then we can become more sensitive using Einstein’s Relativity to look at Cosmic scales and then Quantum Mechanics when we are looking deep into the Nano nature of the physical. Einstein imagined himself travelling with a photon of light and saw he could cross the Universe in no time, while Quantum Mechanics describes the limits of time and space as far as it possibly can into the present moment.

2500 years before Max Plank made his observation on consciousness (shown above), the Buddha made a similar observation about the World when he listed what he saw as Five Aggregates (“Khanda’s”, see sidebar) to describe the way nature aggregates conditions. An aggregation is a fusing together of conditions or conditioning. Pure consciousness is the fifth but most simple aggregation listed. 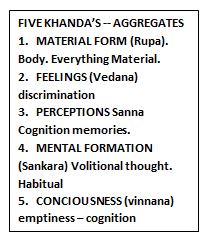 The Buddha saw this pure consciousness feeding back into his mind before there was any further movement. When asked about its beginning, he said he had looked back over twenty four Kalpa’s (Universal Cycles) and no beginning of consciousness could be seen. We can assume from this that consciousness has always arisen dependent on past volition that goes back to a time and place before it could be measured or determined. These questions will no doubt remain in the realm of Physics, but dualities like beginning-less beginnings and everlasting life are extremes that the Buddha eschewed in favour of the “Middle Way”, a perfectly balanced path between extremes. This balance is analogous to us being aware deep inside the present moment, between the duality of past and future. Here pure consciousness becomes the first filter or datum that we can relate to before any other conditioning arises. To do this we use the stillness to allow “calcination” to separate and allow us to perceive the aggregations that evolution has made over deep time.

Four out of the five aggregates (80%) of what the Buddha described are mental phenomena, with just one, the last one, covering everything physical that “arises” in the universe. This fifth aggregation includes all the elements particles and compounds that have fused together to make us (our mind and body) and our Universe together with the zoo of exotic particles that play their part to make it all happen. As a counter point to the Buddha, Physics has concentrated its study only on this physical world and sees its main priority in understanding how the constructed Universe got to us. As yet Physics gives no credence to the mental world because in their eyes, it cannot be measured. The mental world can however be discerned and understood by anyone who has practiced to look. It is a repeatable process of calibration that uses the breath and then the still consciousness of mind as a datum. As an aside it is true to say that at this point in time Physicists have actually discovered much less than 5% of the so called physical Baryonic matter (The Buddha called this Rupa). There is good reason to think that they will discover more (up to 20%) in the future, but 80% of the Universes energy remains as so called Dark Energy, counted in the energy mix but without any real idea of how to actually measure it. From the Buddha’s perspective this missing 80% of energy can be seen as consciousness existing in the mental realm.

The Buddha has said Mind creates everything, but this truth needs to be discovered by each of us individually to be fully realised. It can be inferred that the Universe itself is like a big mind and we attach ourselves personally to it. Our individuality is much like a separated shard of a smashed hologram, each shard with own complete universe embedded. Separate but still connected to the whole including all the other broken shards. The Buddha’s eight fold path is a complete set of instructions showing us how to calibrate our own personal mind in a way to make pure consciousness real for us each individually. When this is known we can practice to relax and release our grasping of it. The first step is to understand consciousness, only then can we turn our attention to releasing it along with its suffering, dis-ease and unsatisfactory nature.

Relaxing deep into the heart of consciousness will eventually allow us to realise with a profound awareness that consciousness has finished feeding back on itself. It can happen quite abruptly! It has been released externally and is now unified with us personally. With this we will know beyond any doubt, that at our personal death all the karmic conditions will release if this state is maintained. We see that the world is no longer external. We see that birth and death are relative happenings within the flow our mind stream. The world still operates but its wave of infinite possibilities has unified into this individual mind, such is its purity brought about from practice and insight. The external world has become unified with us. For most of us, external consciousness does return when the momentum of this natural experience finishes, but we know now the way things are and it will only be a matter of time before this final experience is complete. We are aware inside the stream of consciousness flow and we know that it is conditional and can see the transcendent. We are on a pathway to realise enlightenment. This can be thought about as absolute balance. Here we can know the Absolute Truth that is always right there, and has always been right there, at the heart of the present moment, waiting for us each to individually realise. Only then can we transcend the cycle of Samsara, the cycle of birth and death and realise the absolute peace of Enlightenment.