The Buddhist teachings say that at the very core of life there is grasping; a holding on with what is described as our desire to become. This craving is a duality incorporating both a desire to get and hold on, and an aversion or ill–will to get rid of what we don’t want to experience. This conditioning gives rise to delusion and fear which keeps us grasping for satisfaction. It is the will of this grasping that is built into our consciousness at the most subtle of levels and it keeps us on the wheel of becoming. This movement of conscious will is insidious; it keeps conditioning our consciousness to the point that we do not even notice it and much less notice the pure still consciousness that this movement is nested in. The practice of Buddhist meditation is a pathway to relax our mind and the consciousness that forms it. This practice eventually makes the mind still enough to notice, that even this stillness of mind is a conditioned phenomenon and is being driven by past karma (Sankhara’s in Pali). It is only when there is the opportunity to still the feeding back of this primal conditioning that we can start to realise the absolute truth of the present moment. We can see and know that this is the place where all beginnings and endings do begin and finish. The Buddha described this in his second and third noble truth. The fourth noble truth describes his Noble Eight Fold Path and he called the fulfilment of this path of practice Enlightenment. 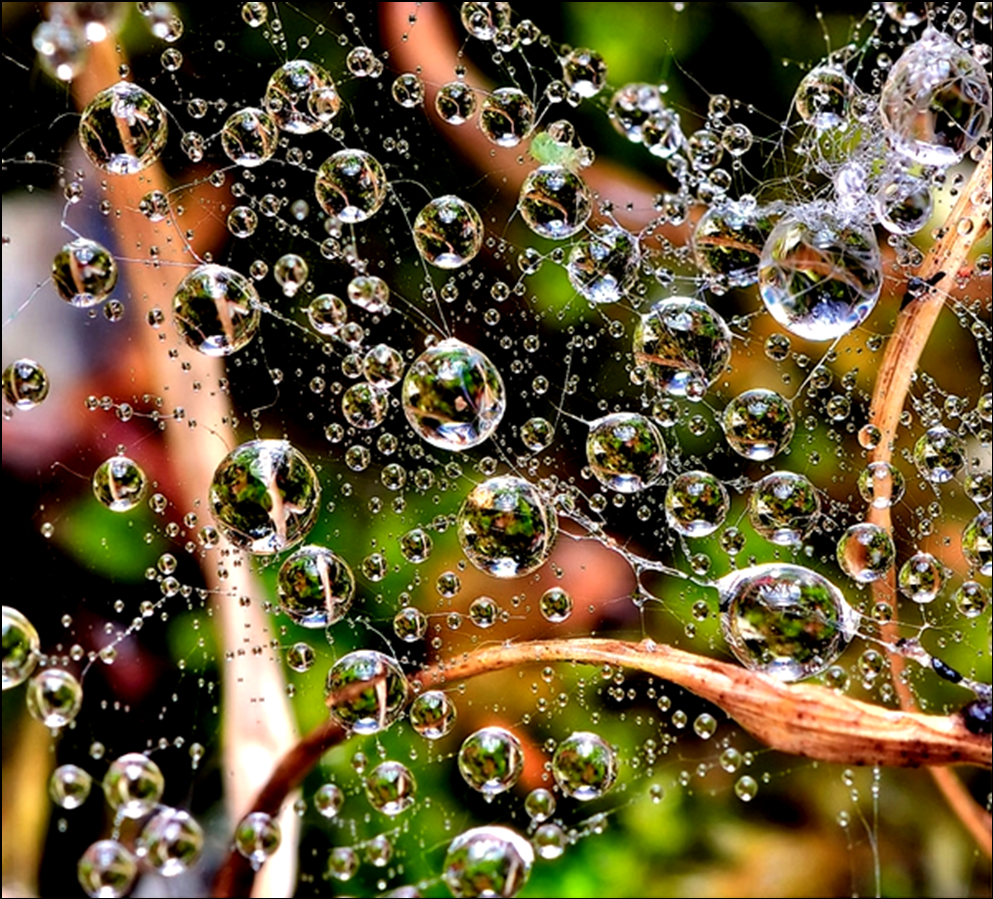 Eventually though, we notice that the mind is yearning for peace and as we start to notice this, we start to see what the Buddha called Dukkha, his First Noble Truth, which describes the unsatisfactory nature of creation. We eventually start to see that the world of conditioning cannot bring about the true peace that we long for. It cannot give us liberation and freedom! We eventually start to see that we are trapped inside a jail of our own making. Happily though, we can realise that we have the key for our release.

In understanding consciousness we do need to start experiencing its all-pervasive nature, we need to get a feeling for the scales that are involved. As we become aware we start to see how consciousness facilitates the very small right down to where we can see “still consciousness” feeding back on itself as the Buddha said, “countless time in the wink of an eye”. Indeed we can notice that it is this feedback that gives “still consciousness” an identity deep in the subtlety that can be experienced in the present moment.  Once it is seen and the experience is known beyond any doubt, it can be used as datum or reference to experience the aggregations of consciousness as they build into the increasingly larger scales of compounded consciousness nested above this purity. This is the build-up of our mentality as we increasingly grasp desire to form me and mine, especially as the physical world starts to build and evolution as we know it comes into play. All sorts of mental and physical worlds can be built up as they nest into our consciousness. They do become part of our being in the present moment; all nested as conditions that are founded in the still consciousness at our core.

Physics has given us access to understand the extent of our Universe in that it is estimated to have started 14 billion years ago. When asked about the beginning of consciousness, the Buddha said that he had looked back over 24 Kalpa’s (A Kalpa is a Pali world that means one universal cycle) and no beginning could be seen! It needs to be remembered that the Buddha had developed his mind to the point of Unification. The past and the future of all conditions, all the aggregations of the universe, have been integrated and then unified into the present moment of his mind, so when a question like this arose he is said to see into the future and the past with what we might think of as a superconducting mind. There is no resistance and the answer would be just there. The Buddha’s idea of what a universe might look like would probably be different to the way we see it today, but non-the-less the enormous universal scales he realised more than 2500 years ago are evident in his explanation of a Kalpa. He said a Kalpa is a length of time such, that if you get the finest gauze from Benares, and scrape it once every hundred years over the hardest and highest of the Himalayan mountains, a Kalpa would be the length of time for the mountain to be worn down to the ground. Looking in the opposite direction, his thoughts on pure consciousness put him deeper into the realm of Quantum Mechanics than we are today.

Physics today has a place for every quantum of energy in the Universe, as spelt out in the “Copenhagen Convention” of Quantum Mechanics and further it is starting to see beyond this Universe to multiple universes as described in the “Many Worlds” model of Quantum Mechanics. This model will start to call on the reality of stand-alone mental consciousness described by the Buddha in his dissertation of the Five Khanda’s (aggregations). Four of the five (80%) are mental and only one (20%) is physical. This does seem to accord with what we actually see in the energy mix of the Universe.

I have made a diagram that I trust will help in understanding of the Scales of Consciousness. 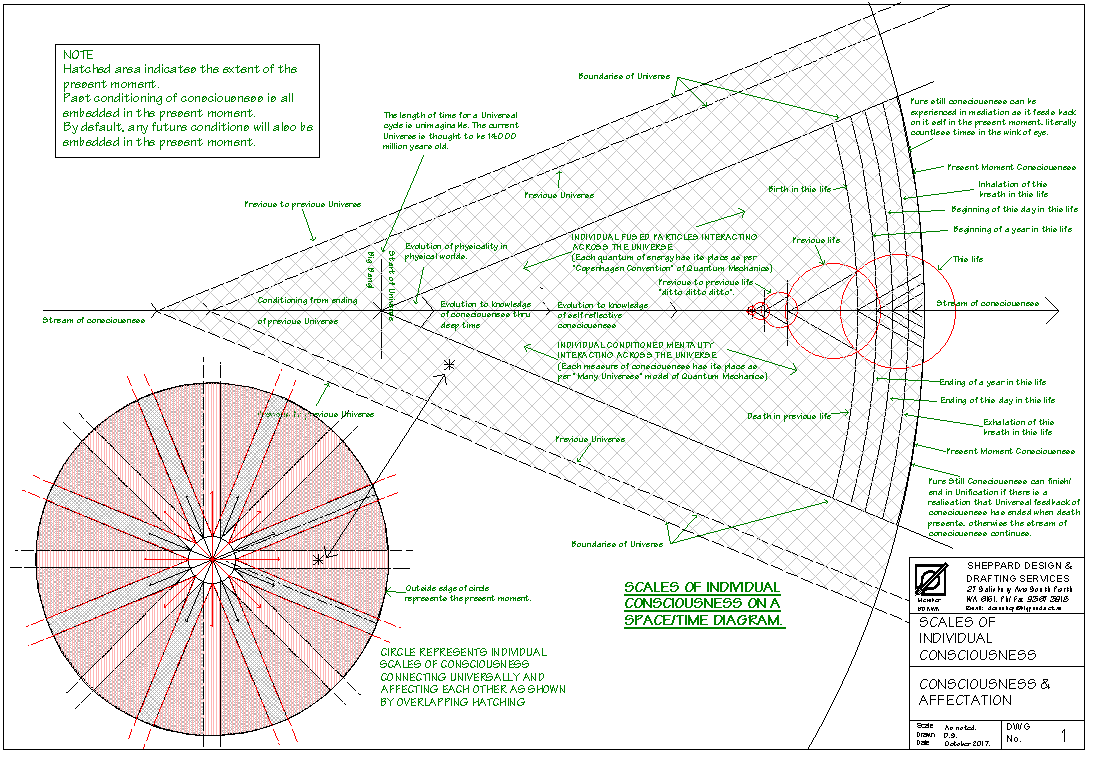 So coming back to the question implicitly posed in the title “The will of consciousness?”  We can ask does consciousness have will and we can say yes, it does. It has a will that is born out of desire! Even still consciousness has a will that causes it to arise as a feedback loop to give consciousness an identity. This feedback aggregates and builds until we can see that the entire universe along with all of its conditions is piggy backing onto the still consciousness that feeds it all from its core. Still consciousness can still be seen in the heart of the present moment, a place that we can all eventually realise and know as the home of Absolute Truth. When mindfulness of this fact becomes established we can look out into the world and see still consciousness embedded in it. It is literally the space of the Universe! We can see the will and the intention that keeps it all going. Then as wisdom and understanding increases, we start to isolate and focus on the still consciousness and see it as transcendent. The clarity and purity increases with a latent energy that cannot be stopped and then consciousness just finishes in unification. The world with all its conditions just stops feeding back and we will know that our karma, embedded in our “stream of consciousness” has stopped feeding back from the world and we know that if this condition is in place at our death, there will be no more rebirth. We are out of jail, liberated and free. True peace is right there --- it has always been right there in the present moment, only we have been blinded by the conditioning embedded in the moving consciousness. Will has come into balance. Questioning has come to an end and no answers are required. When asked about this state of being, it is said that the Buddha “maintained a Noble Silence”.